Be confident you're getting the best diamond for your money. Here you'll find unbiased information to help take the anxiety
out of this exciting time. We don't buy or sell diamonds and we don't get commissions for recommending certain retailers.

Be confident you're getting the best diamond for your money. Here you'll find unbiased information to help take the anxiety out of this exciting time. We don't buy or sell diamonds and we don't get commissions for recommending certain retailers.

Diamonds are a mineral made of carbon, crystallized at very high temperatures and pressures. Naturally, diamonds are formed 150 to 200 kilometers (93 to 124 miles) or more below the earth's surface. A diamond is the hardest of all known natural substances. Its color ranges from colorless to yellow, brown, gray, orange, green, blue, white, black, purple, pink, and, extremely rarely, red. Read more about Fancy Color Diamonds

Extraordinary properties
The unique properties of diamonds have made them sought after for centuries. Highly prized for their beauty and rarity, diamonds are also highly valued for their extraordinary physical properties in industrial applications, such as abrasives and as optical windows. But diamonds haven't reached their full potential. One day in the near future, diamonds, specifically lab grown synthetic diamonds, could revolutionize electronics as we know them by replacing silicon as the preferred material for semiconductors.

Harder than steel
Hardness is a measure of a material's resistance to scratching or abrasion. Diamonds are the hardest naturally occurring material on Earth. They are 10 on the Mohs hardness scale and are exponentially harder than sapphire, which rates as 9, and steel, which rates as only 6.5. This makes diamonds an optimal choice for engagement rings that are worn everyday for decades. Any other gemstone would be scratched and chipped after only a few years of daily wear.

Weaker than steel
While diamonds are incredibly hard, they are not exceptionally tough. Toughness is a measure of a material's resistance to fracturing or breaking. The difference between the two properties can be thought of as the difference between glass and leather - glass is hard and cannot be scratched by your fingernail but it can be easily broken; leather on the other hand can be scratched by your fingernail but is very tough and nearly impossible to break.

Can diamonds break?
Yes, diamonds can be smashed by a hammer, broken by a hard strike, and diamonds can be chipped if accidently hit or dropped. After years of daily wear, diamonds set in jewelry, especially rings, will likely show wear-and-tear in the form of small chips and abrasions.

"Fancy Color" is a term used to describe any colored diamond that is more saturated than the 'Z' color.

Diamonds occur natural in nearly every color of the rainbow-yellow, orange, red, green, blue, pink to purple, brown, steel gray, white and black. These colors can also be produced artificially through treatment processes.

What color diamond is the most expensive?
In the 'D' to 'Z' color range, the most valuable color is 'D', completely colorless, but in Fancy Color Diamonds, the more color the better. Highly saturated, vivid hues are the rarest and most valuable. It's arguable which color is actually the most expensive -pink, blue, red or green. Extremely rare diamonds are often sold at international auctions. Records are set by both the total sale $amount and the 'per carat' price, meaning the total sale price divided by the carat weight. A few recent record setters include:

THE OPPENHEIMER BLUE, a 14.62 carat Fancy Vivid Blue rectangular-cut diamond that held the previous world record for any jewel sold at auction, more than $58 million USD, at Christie's Geneva Magnificent Jewels sale in May 2016.

What causes the color in diamonds?
The wide range of colors seen in diamond is caused by chemical impurities that replace carbon atoms in their crystal structure, such as nitrogen that produces yellow diamonds, or by structural defects, such as the deformation that produces pink and brown diamonds.

Can the color of a diamond change?
Yes, diamonds can be enhanced to artificially change their color. Treatment processes include coating, irradiation, annealing and high pressure/high temperature (HPHT). Read more about Diamond Treatments

What is fluorescence?
When exposed to ultraviolet light (uv) some objects glow or emit light. Fluorescence in diamonds is caused by submicroscopic features in the atomic structure. Diamonds can fluoresce a variety of colors, but blue is the most common and the most desirable.

How is fluorescence described?
Diamonds emit varying degrees of fluorescence, which is noted on GCAL certificates as none, faint, medium, strong, or very strong. GCAL includes the diamond's fluorescence on the certificate because it is a permanent identifying characteristic.

GCAL uses a set of master fluorescent diamonds for comparison to consistently and accurately describe the strength of fluorescence.

How does fluorescence affect value?
Fluorescent diamonds are slightly to heavily discounted in the trade, and that lower price should be passed on to the consumer. Below is a chart showing the approximate percentage of discount based upon size, quality, and strength of fluorescence.

Laser Drilling
The purpose of laser drilling is to lessen the visibility of a dark inclusion. This is achieved by using a laser to create channels reaching from an inclusion to the surface of a diamond. After the channel hole is drilled, the diamond is soaked in an acid to either bleach or dissolve the inclusion. The inclusion remains but the color of the inclusion is removed so that the face-up appearance is improved. This is a permanent enhancement. The process leaves a minute hole or holes depending on how aggressive the treatment was. Laser drilled diamonds present similar liquidation problems as fracture filled diamonds.

Professional gemological labs will not quality grade these diamonds due to the lack of treatment stability. The re-sale value of fracture-filled diamonds is very weak. The most well-known brand of fracture filled diamonds is called Yehuda (an Israeli company that began the practice in the 1980s).

Irradiation & Annealing
Exposing diamonds to irradiation can produce a wide range of bright colors from undesirable brown and light yellow diamonds. Irradiation initially creates green to blue to black colors and when followed by annealing (heating) the colors can be changed to bright yellows, oranges, reds and pinks.

The methods used for irradiation treatment today do not leave residual traces of radiation. The colors are stable under normal wearing conditions but caution must be used when exposed to a jeweler's torch.

High Pressure High Temperature (HPHT)
The High Pressure High Temperature (HPHT) process permanently alters the color of diamonds. This treatment can change brown diamonds into colorless, yellow or green. Diamonds are HPHT treated by processing in a machine that creates temperatures up to 2500º and pressures up to 85 kilobars. This treatment significantly affects the appearance and value of a diamond.

This process is mostly used to turn Type IIa* brown diamonds to a near colorless state. The treatment is permanent and vastly improves the beauty and salability of the diamonds. It hampers liquidity in some fine jewelry markets.

A lab-grown diamond is the result of a technological process, as opposed to the geological process that creates natural diamonds. Lab-grown diamonds have essentially the same chemical composition, crystal structure, optical, and physical properties of diamonds found in nature. Also known as Synthetic Diamonds, these man-made gems are made of carbon and have a hardness of 10.

How are lab grown diamonds distinguished from natural earth mined diamonds?
Our ISO Accredited Forensic Laboratory has developed processes and protocols to be able to efficiently detect and identify lab-grown diamonds, both loose and those already set in jewelry, by utilizing a combination of spectroscopic techniques, including UV-VIS, FTIR, Raman and PL spectroscopy, and gemological analysis of crystalline growth structure and fluorescence.

How does the quality of lab grown diamonds compare to natural diamonds?
Lab-grown diamonds are being produced in all shapes and sizes ranging from 0.0025 carat to over 5 carats. Colors and clarities include the full range from D-Z and light to vivid fancy colors and flawless to I3.

What is the difference between a CVD and an HPHT lab-grown diamond?
Lab-grown diamonds are created by either high-pressure, high-temperature (HPHT) or chemical vapor deposition (CVD) diamonds methods. The HPHT method produces cubo-octahedral crystals that are grown in a molten metal and therefore commonly have metallic inclusions. This method produces vivid yellows, blues and colorless diamonds. The CVD method uses a carbon plasma cloud to grow diamonds on seed plates. This method produces wafer shaped crystals that are usually brown to near colorless. Post growth treatment can further lighten the colors. Because CVDs grow in layers we see characteristics such as planar clouds and inclusions in growth planes.

Purchasing lab grown diamonds In the last 5 years, gem quality, colorless and near colorless, Lab Grown Diamonds have become a popular choice for many diamond shoppers. Available in many retail stores, they offer a new exciting product category.

Ask for a clear, written description of what you're buying. If it's a lab grown diamond, expect it to come with a grading certificate stating its authenticity, and most producers of Lab Grown Diamonds inscribe "LG" on the girdle to make them easily identifiable.

Diamond Simulants and Imitations are gems that look like diamond but have different chemical and physical properties. These imitations can be natural gems, such as white sapphire, or man-made materials such as Cubic Zirconia or Moissanite. Often these are marketed under names such as 'Diamonique' or similar.

How do I know if my diamond is real?
There is a great deal of misinformation on this topic. Many look-alike products marketed under different names or deliberate misrepresentation of imitation gems as 'real' diamonds have led to confusion.

Diamond testers
Walk into almost any jewelry store and they'll have what is generally known as a 'diamond tester' - an instrument designed to distinguish diamond from its most common look-alikes, including cubic zirconia (cz).

Diamonds are exceptional conductors of heat - about 5 times greater than copper. In the 1980s and 1990s all diamond testers worked by testing a gem's thermal conductivity. Diamond, being a far superior thermal conductor compared to any other simulant, was easy to separate.

Then around 1999, moissanite, shook up the jewelry industry because it could 'fool' the testers. Essentially pure silicon carbide, moissanite's thermal conductivity is comparable to diamond.

'New' diamond testers
The jewelry industry quickly adapted and developed testers based on electrical conductivity instead. Moissanite is electronically conductive and most diamonds are not.

The exceptions
Natural blue diamonds, including the famous Hope diamond, conduct electricity and produce a "moissanite" result from diamond testers.

Also some lab grown diamonds will produce a "moissanite" result due to their electrical conductivity. Remember, the driving force in diamond synthesis research is to grow diamonds that can replace silicon as semi-conductors in electronics. They're purposely engineered to be super diamonds - the hardest material, the best thermal conductor and electrically conductive. Instrument manufacturers are currently developing a new generation of testers to keep pace with Lab Grown diamond technology. 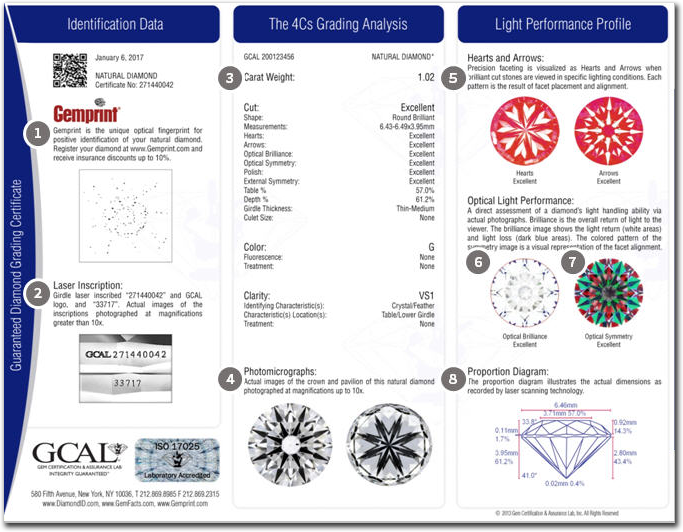 Each panel of a GCAL Certificate tells a story to the customer.